“Behind the Wheel” is a new story series celebrating the history of Garber. Much like going on a road trip, we will take a “historical drive” through memory lane to tell the many tales that, when woven together, create the tapestry of Garber’s 110+ year history.

These stories will dive deeper into the early beginnings of Garber, which have collectively helped transform the company into an award-winning $1.3 billion automotive organization employing over 2,100 people today.

Buckle up. It’s a fun adventure, and we’re all a part of it.

Every company has a beginning. Every person has a history. How something —or someone— starts often sets the tone for its future.

The establishment of Garber, its dealerships, and its entities (Gateway Financial Solutions, RightWay Auto Sales, Saginaw Spirit) is built on our values.

Honesty. Empathy. Respect. Work Ethic. Integrity. Pride. These values have driven our actions and attitudes at Garber since Day 1, over 100 years ago.

As our president and owner Dick Garber often says: “Tall buildings are built on strong foundations.”

Our foundation sits on the shoulders of a man named Guy S. Garber —Dick Garber’s grandfather— which is where our story begins.

Down on the Farm

When you take stock of the Garber landscape today (23 dealerships, 41 RightWay Auto Sales locations, Gateway Financial Solutions, the Saginaw Spirit hockey team), it’s hard to believe it all began with a boy on a farm.

Guy S. Garber was born in 1884 in Eaton County, Michigan: about 20 minutes outside of Lansing, the state capital. But he didn’t grow up with a silver spoon in his mouth.

In fact, he didn’t grow up with a lot of material things at all.

“My dad grew up very poor on a farm,” said his son Ike Garber in a past interview. “The farm was sandy, which was hard to grow anything, so they didn’t have any money.”

Guy was homeschooled, taught by his mother his whole life. When the cold Michigan winters set in, Guy stayed indoors the entire season when he was young.

“He didn’t have shoes,” Ike explained. The snow-covered roads would have been too frigid for his feet.

Even though Guy couldn’t walk outside in the cold, he still took the steps he needed to make a life for himself.

It began with popcorn. 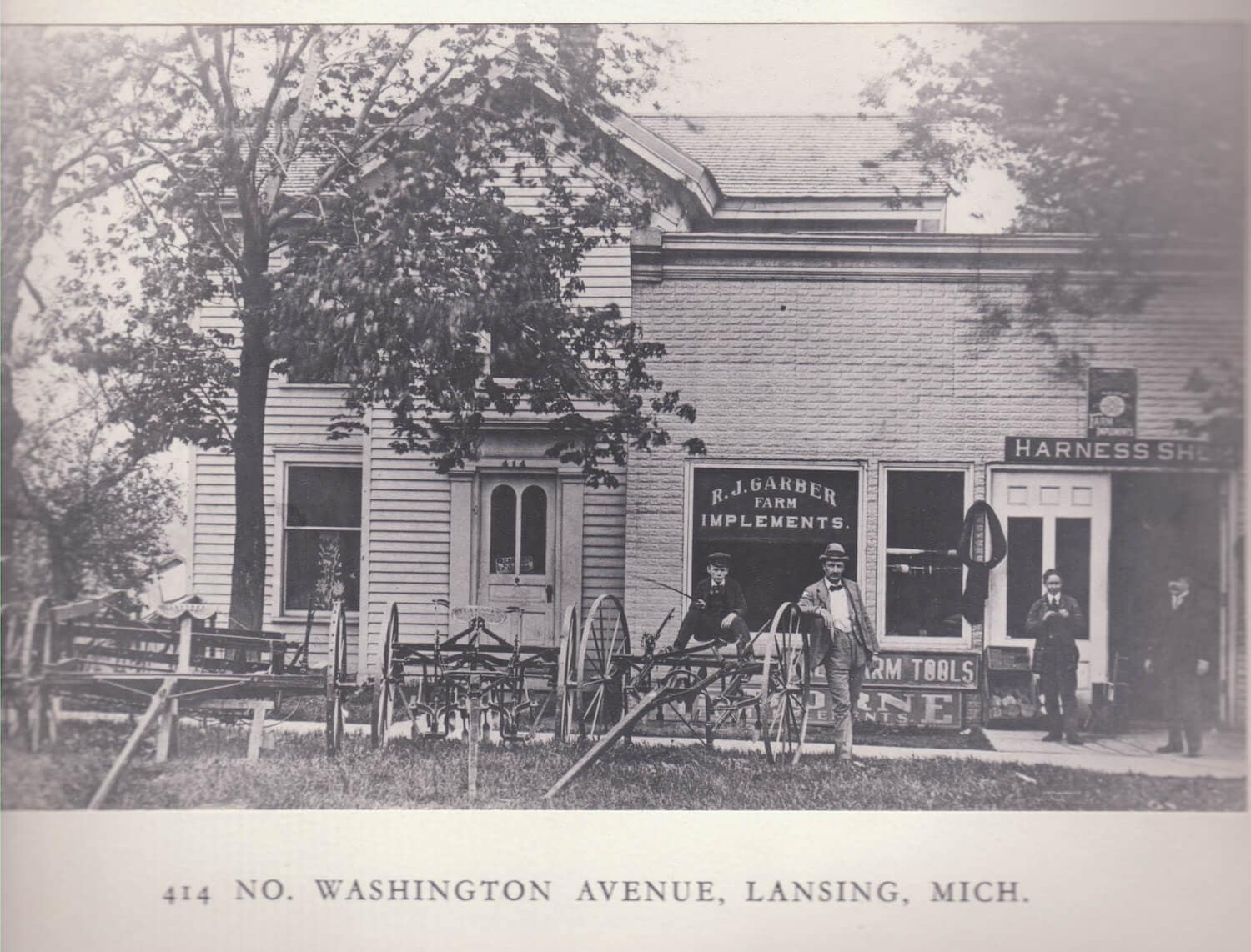 From Business Boy to Business Man

Guy showed he was business savvy from the start.

In 1893, when Guy was just 9 years old, he established a popcorn business. The business —his first— thrived, giving an early glimpse into an entrepreneurial spirit and the direction of where his life would lead.

Guy was so successful, in fact, that his grandfather built him an actual popcorn stand to help Guy take his efforts to the next level. Guy popped the popcorn himself, selling the salty snack and candy to people passing through.

Popcorn and candy weren’t the only things Guy sold. When he got older, he turned to newspapers. He sold the papers on the streets of Lansing near the family farm.

His work ethic and business skills only grew stronger, and with it, came more responsibility. 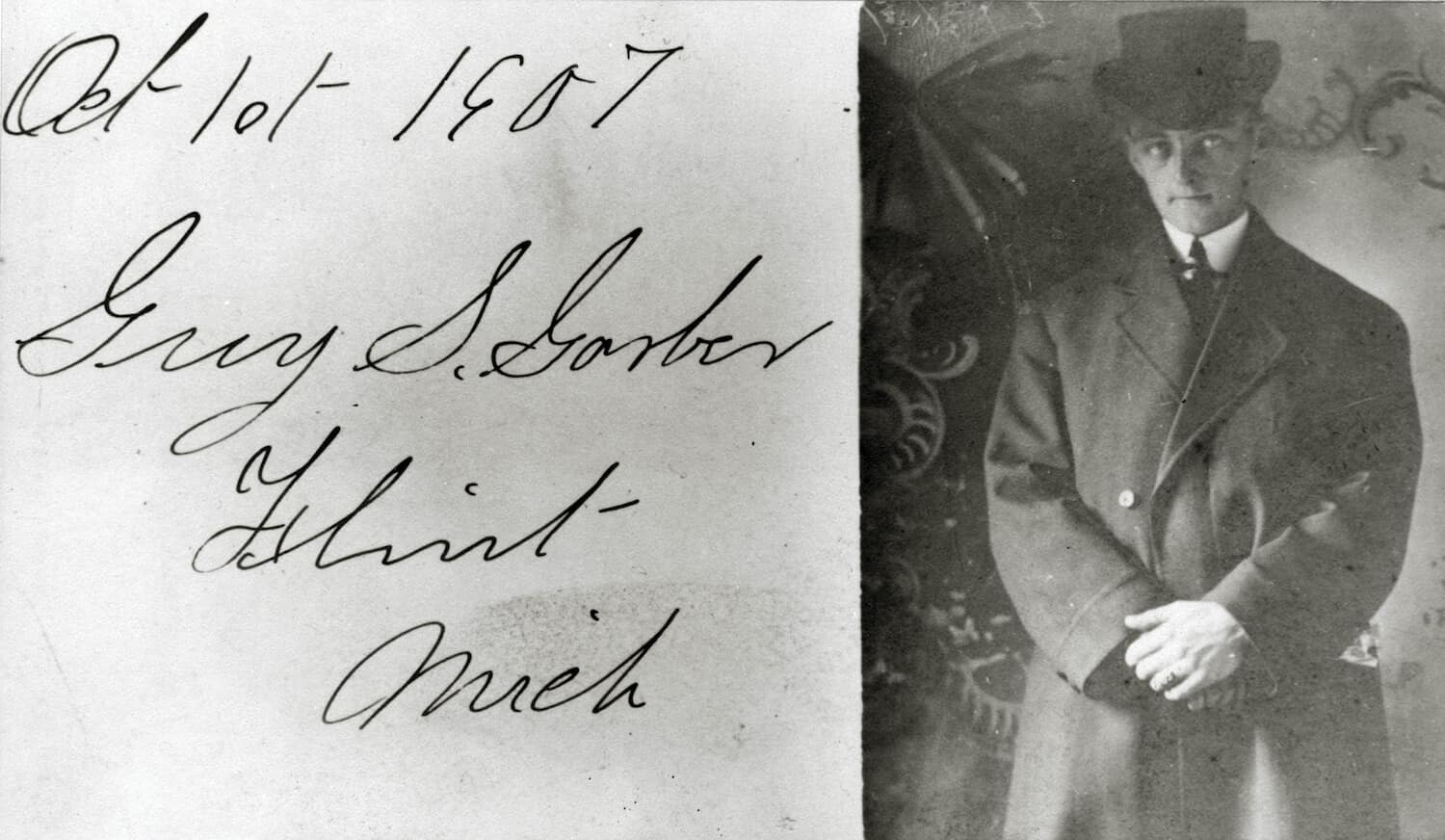 Guy grew older, and his business skills grew wider. At the beginning of the 1900s, Guy went into the farm implements business with his father.

Guy sold farm implements: helpful equipment tools that farmers used to help till the ground and prepare the land to plant. These tools, such as trailers, diggers and plows, were often pulled by working animals.

At the time, the horse and buggy were still the only way to travel. But the agricultural industry helped set the stage for a transition into a new mode of transportation. Times were changing, and wheels were turning, both on the road and in the brains of businessmen who were primed to change the world with an engine that could.

Guy’s reputation shot him to the forefront of this formative shift. As a farm implementation salesman, Guy did the same as he did when he sold popcorn and newspapers: he succeeded.

Then an unexpected suggestion steered Guy in the direction of a new future for him, and for the world.

A traveling salesman crossed paths with the Garber men in 1907. He had heard of the great job that “that young fellow Guy Garber was doing.”

“I think this automotive industry has some legs to it,” the traveling salesman said. “Guy should go down to Flint and see what’s happening down there.”

So Guy did. At just 23 years old, he landed a job working for Buick under the leadership of William Durant, who later founded General Motors Corporation.

A few years earlier (in 1904), Durant had purchased a flailing Buick Motor Company. His leadership and vision helped steer the company’s course towards success.

Though he was an early titan in the automotive industry, Durant was also an eccentric, volatile man. He preferred sales over administration, but his skills in promotion and salesmanship helped position Buick as a leader in this new automotive world.

Durant helped kickstart an industry that opened the doors for Guy.  As a field rep for Buick, Guy’s job was to establish automotive dealerships: helping inspire a significant shift of thinking and early adoption in the dominant horse-and-buggy era. The automobile was an entirely new concept — and Guy was in the middle of it all, helping put cars on the map.

Guy’s future –which inevitably would lead to our present— stretched in front of him. What would transpire over the next several decades would help cement the Garber name as a trailblazer in the automotive world, and a company that holds a true heart for the community.

Guy had made a large leap from a popcorn stand as a kid to a traveling salesman for automobiles, a brand new concept that now helps us all get where we need to go.

Though he had humble beginnings, Guy was only just getting started.

Stay tuned for our next “Behind the Wheel” story, where we will tell the tales of Guy Garber’s distributorship era.